What they found nearly 40 miles from Bahia de los Angeles was so impressive that desert expert and author Choral Pepper believes it may have been the beginings of a Spanish mission shown on a 1757 Jesuit map, but otherwise not recorded in known writings. A bell with ill-fated mission’s name, ‘Santa Maria Magdalena’, ended up at the nearest established mission, Santa Gertrudis.

The only photographs taken at the site appeared in Choral Pepper’s Desert Magazine’s ‘Magic of Baja’ series about the expedition with Erle Stanley Gardner. This is what I have been seeking since meeting Choral nine years ago. I have wanted to know the location of this site since reading her Baja book back in 1973!

Choral Pepper and I at her Coronado, California home discussing the lost mission they found in 1966… I also spoke by phone with three others on the expedition: Bruce Barron, Ricardo Castillo and J.W. Black. None could recall exactly where it was! Sadly, Choral passed away in 2002. See many of her photos taken on Baja expeditions at  http://vivabaja.com/choralpepper

At the bottom notice ‘Miss de S.M.Mag. empezada’, (empezada means ‘started’). While shown south of the location of the ‘Pepper’ ruins, it is still illustrated as the next mission north of Santa Gertrudis (then called ‘Dolores del Norte’). The map map was drawn from other’s information between 1746-1749, as the author/ cartographer never was in California.

The first opportunity to go to Baja was New Year’s weekend… In Choral Pepper’s magazine and book, the first unusual things reported, causing them to investigate, was a dam and a scraggly date palm.

1966: “The primitive dam among rocks and dead trees”

2009: We find a rock and earth dam which would create a reservoir at the base of the lava mesa. A large ditch along this side of the mesa acts as a canal to bring rain water to the reservoir.

We were not certain of what the berm was as seen from the road. However, it was clear that this was a reservoir once we looked close.

I climbed up a bit of the mesa for a higher view of the dam and reservoir.

Without seeing anything more, I knew this was the site… But, there would be much more still to see! By current roads, we were 35 miles from Bahia de los Angeles.

The road circles the mesa and we look out the side window!!!

The wall… the one seen from space… from the road to Bahia las Animas. Surely others have seen this and investigated? We drove all the way around and parked at the closest approach. A very steep climb was required, but worth it…

Standing near the same place as Bruce Barron did in 1966, Elizabeth takes photos.

43 years earlier, yet so little has changed!

We brought an enlarged copy of the 1966 photo to compare locations and take a new shot from where Choral Pepper had.

Elizabeth and I take several photos and then follow the wall up the mesa. A shorter wall is just left of this area… see it later.

It is the right height for sitting… 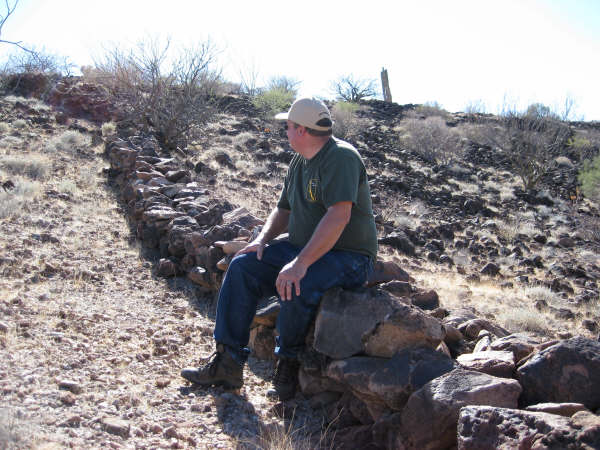 What was the purpose of all the work? What were walls on top of a ridge for?

The sides of the mesa were so steep, the walls weren’t needed for defense. My silver truck can be seen below. This is where we climbed up, just left of that cleared slide or ‘drag chute’ where supplies may have been pulled up?.

At the top of the mesa Elizabeth found this metate (grinding stone).

Clam and oyster shells were all over the ground, inside the rock-cleared circles, on top of the mesa.

Some of the cleared areas connected like rooms in a house.

The high point on the mesa

This is about the location of the second Pepper photo showing Bruce Barron examining the ‘sleeping circles’. The distant mountain range is to the east.

Just two miles to the north is Bahia las Animas. Was this a potential supply port for Spanish ships, 260 years ago?

This cave was just below the top of the mesa, facing southeast and made an excellent observation post for any approach from the land.

Looking down from the mesa to the dam and reservoir at the northeast base of the mesa. If this was a mission site, would the mesa serve as a fort to protect the activities below? Was there a spring that ran dry or insufficient rain to fill the reservoir causing the project to be abandoned? Would the natives alone do so much construction or were the Europeans responsible for all this?

It was a pretty exciting day for us to finally find the site that intrigued Choral and the others in 1966. What we don’t know is if the site has been examined by others in the past 43 years or will my report of it create new interest to solve this mystery?

Heading back down we stop to photograph the second, smaller wall. The other one is in the background. From this point it is very steep drop to the desert. A cleared slide or chute running down here is interesting. I would guess it was where supplies were dragged up by rope.

This wall runs across the desert floor, north of the mesa. It disappears into the brush and trees.

The mesa and wall…

…as seen from the beach at Bahia las Animas (‘Bay of Souls’).

This ‘lost mission’ was not hidden, so it can be certain this was not some secret Jesuit hide-a-way. The location made an excellent look-out, fort, and was close to food and the sea.

The many man-made finds are marked. The wall (#1) is easily seen from above.

Thanks to Choral Pepper for inspiring the search and thanks to Corky Kuhlman for his sharp eye on the computer’s Google Earth.

In 2019, an amigo (Octopup) flew his drone over the walls: https://youtu.be/YSZJSegFtw4

To discuss this further or offer an explanation to what we are seeing, please email me at info@vivabaja.com and put BAJA in the subject line. Thank you! David Kier

After we left Las Animas, we stopped at Las Flores: